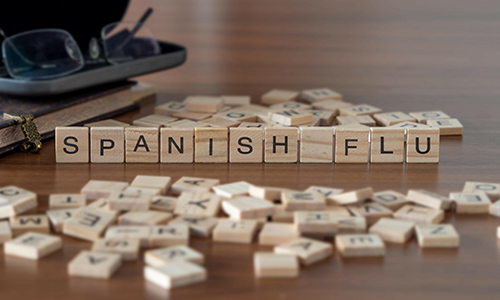 In 1918 a strain of influenza called the Spanish Flu became one of the world’s worst pandemics. Five hundred million people became infected worldwide which was one third of the world’s population. Six hundred and seventy five thousand Americans perished from this influenza which many believe began in America according to the Smithsonian Magazine, November 2017 by John M. Barry.

In 1918 in Haskell County in Kansas, many farmers still lived in sod homes. Farmers there raised cattle and hogs. Seventeen species of birds also migrated over their farmland. Bird influenza infects hogs and humans. An influenza outbreak hit that January in Haskell County. Several of the local residents who had been exposed to the illness ended up in Camp Funston in central Kansas as new recruits training to fight in World War I. On March 4, the first soldier contracted influenza. The disease also spread to other army camps in our country. When there is a new virus and the human immune system is unfamiliar with it, the virus will spread quickly around the world as a pandemic. As American soldiers landed in France, they brought the disease with them, and it spread like wildfire. More American soldiers were killed by the flu than by the war. Remember, there were no vaccines for influenza in those days.

The reason this strain of influenza was called the Spanish flu was because Spain was a neutral country during the war and could broadcast information about the flu to the world. The Spanish flu was a virus that attacked the respiratory system and was extremely contagious through a sneeze, cough, or just breathing. Many American cities closed schools, movie theaters, and large public gatherings. Mask wearing was mandated. St. Louis, Missouri was one of those cities that imposed quarantines and tried to prevent the spread of the disease. More people survived in those communities that took health precautions rather than those that ignored those dying in their cities. In San Francisco, for example, a citizen would receive a $5.00 fine for not wearing a mask in public. In those days, that was a lot of money. Philadelphia downplayed the illnesses in their city saying the dying were not dying from the Spanish Flu. They allowed a parade to take place. Shortly after, 759 people died of the Spanish flu in Philadelphia.

Influenza can still be very dangerous today to the young, elderly, and immunocompromised. It is also extremely contagious. The worst time of the year for the flu is late fall to early spring. Two hundred thousand are typically hospitalized each year for flu-related illnesses in America. Thousands die each year from influenza. There are vaccinations available for the flu today.

It is sad that there were no flu vaccines in 1918. We should be grateful there is a vaccine available to us today.