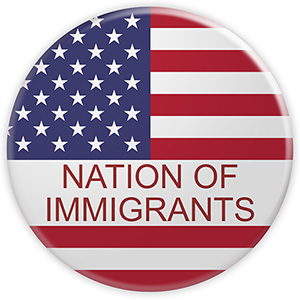 Living in the Chicago area, I am reminded daily that we are a nation of immigrants and migrants. They are the ones that know what hard work is and how to make a life here in the United States. They are ambitious and do those things that seem to be unsuitable occupations for many Americans that have been here for a much longer time. In this country, they are the roofers, landscapers, custodians, and farm laborers working in 95 degree heat without complaint.

I am also reminded of my grandparents who came to America with nothing and managed to create a living and raise their families quietly teaching them the value of hard work like so many immigrants have done in our country’s history. My father’s parents, Elias and Julia Kamar, were peddlers when they got off the boat in New York City. They passed by the Statue of Liberty when they arrived seeing the lady with her torch raised arm welcoming them to their new homeland. Since my grandmother, Julia, had lived in Majorca, Spain, she could understand Italian in those areas of the city because the language is so similar to Spanish. In those neighborhoods in New York, they were selling goods in their push carts and they were able to save money. My grandfather Elias spoke perfect English and had been a tour guide in the Holy Land before immigrating. They ended up eventually traveling to Michigan City, Indiana and then to Michigan so my grandfather could work in the factories. They stayed near their relatives in Flint, Michigan and then in Detroit where they bought a grocery store.

My other grandmother, Nora Rashid, wrote much of her history in a manuscript although she only received a fourth grade education. She traveled much in her life time from northern Lebanon where she was born, to Sierra Leone, Africa, and Barcelona, Spain where her mother died and then to Casablanca, Morocco before also coming to Michigan with her father.

Nora had a difficult time as a child. She went to an orphanage for a while and then when her father remarried, she was treated poorly by her stepmother. She lived with relatives nearby in Lansing, Michigan. Soon she met my grandfather, Peter, and they were married at St. Mary’s Cathedral in Lansing. Grandma Nora was only 15 but very mature for her age. They worked hard, saved money, and also bought a grocery store. Both of my grandmothers and my mother Mary always kept a spotless home. They knew that cleanliness keeps away germs and illness. They all had family members that died from disease in their lifetime. With our current Covid Variant, we have learned that simple things such as good hand washing help to keep us safe.

During the Great Depression, Nora put together packages of vegetables and meat for her customers as she also knew what it was like to be hungry. My grandparents always had a huge garden. They worked so diligently and were glad to have the opportunity of work. During World War II, she crocheted an American Flag for President Roosevelt which is on display in his library in Hyde Park, New York. All my uncles on both sides of the family who were of age to go to the service, including my father Nicholas Kamar, went to war and all returned healthy, thankfully.

Nora and Peter worked very diligently with the help of my uncles and my parents to make a thriving bowling business in Lansing. In the past, we see those who didn’t feel they were owed anything in this country and enjoyed the challenge of making a good life.

In my historical novel, THE ADVENTURES OF FRANCIE FITZGERALD by Victoria Kamar Olivett, we learn of an Irish immigrant family who came here during the great famine in Ireland. They came for economic and religious freedom as did countless of millions of others. They came for opportunities that they didn’t have so their children might have a better life. In the book, Francie and her friend Sean, watch the Statue of Liberty being placed on a pedestal in New York Harbor. They were amazed that $100,000 was collected for the stand and it was Joseph Pulitzer who encouraged donations by printing all the donors’ names in his newspaper, The New York World. It was the working people in America that gave money for her foundation in the harbor. As the French called her, “Liberty Enlightening the World,” all newcomers could now be greeted as they come to our shores. Francie and Sean also remember the words of Emma Lazarus, “Give me your tired, your poor, your huddled masses yearning to breathe free, The wretched refuse of your teeming shore. Send these, the homeless, the tempest-tost to me, I lift my lamp beside the golden door!”

What is your family back round? What memories do you have about your family? They may have moved from the south or immigrated from a different country. We all have personal stories such as this one. Please comment!