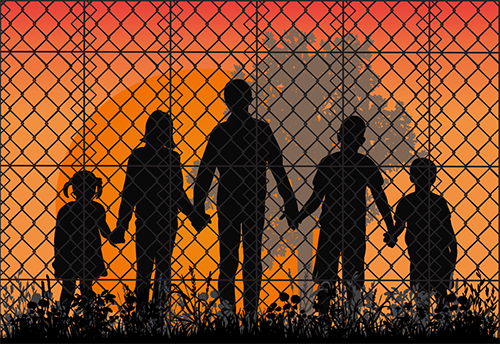 The headlines and newscasts are raising the issue of the U.S. southern border, again.  Reports of thousands of unaccompanied minors are in the news.  The political parties will verbally battle over the issue endlessly, but the odds are that little or nothing substantive will get done to address the issue in the near term.

What is often ignored or superficially addressed is why are conditions in Central America causing the march northward.  It begs the question, why, after touting a major agreement with Central America, the migration northward continues.

The U.S. concluded a free trade agreement with several small economies of Central America (Costa Rica, El Salvador, Guatemala, Honduras, Nicaragua, and the Dominican Republic).  In view of the continuing exodus of people from their home countries, what are we doing (or not doing) to improve these economies so that people stay in their home countries?

There are numerous chapters in the agreement that impose obligations on issues such as labor, environment, electronic commerce, financial services, telecommunication services, intellectual property and more.  A part of the goal was to lift these economies to higher levels.  Supposedly, CAFTA would improve economic conditions.

The U.S. negotiated favorable provisions to benefit U.S. exporters.  According to the U.S. Department of Commerce, CAFTA eliminated all tariffs on U.S. consumer and industrial goods exported to these Central American countries.  Tariffs on U.S. agricultural exports to these countries were significantly eliminated by 2020.

On the surface, it appears that U.S. negotiators were successful in concluding an agreement that overwhelmingly favored U.S. commercial interests.  But, did CAFTA do anything to address the underlying weaknesses of these countries that cause the “export” of its population to the U.S. and is a constant controversial issue here?

By obtaining concessions from these small countries, has U.S. dominance in trade weakened these economies and caused more economic harm or instability?  The continuing northward march from some of these CAFTA countries is a symptom of some fundamental issues that should be examined and addressed.

It may be argued that these countries were never good candidates for a free trade agreement because their economies were not sufficiently developed.  The final CAFTA text recognizes this point in a minor way by including “transition” periods allowing these countries to take additional years to fully implement the agreement.  However, even this is often inadequate.  The U.S. blames shortfalls on implementation on the country that fails to meet its obligations.  Regarding our agreements with developing countries, the U.S. rarely, if ever, provides sufficient education and training to help the trading partners that are deemed to be “violating” the terms of the agreement.  Often, the developing countries that lag in implementation do so because of a lack of skills and/or expertise in the areas that need the most attention for improvement.

While the Office of the U.S. Trade Representative’s website informs us as to the great success of CAFTA, the arrival of thousands at our border may signify a different reality.  What is needed is a deep-dive assessment of the underlying economic and political deficiencies that cause this northward migration.

Is CAFTA improving economic opportunities (jobs, pay, etc.) with our CAFTA trading partners?  Do CAFTA partners need training and education for them to fulfill their obligations under the agreement?  Has the U.S. simply concluded an agreement and now hopes all will be better at some point in the future without doing the hard work necessary for CAFTA to have benefits in these countries?

The overall situation should require U.S. embassies in these countries to provide assessments about the progress or lack thereof under the agreement and outline the deficiencies.  Hopefully, our career bureaucrats are permitted to provide the bad news as well as the good news.  Career U.S. diplomats and federal government officials in various agencies responsible for monitoring progress need to identify how the U.S. can contribute to improvements in these countries if CAFTA is to deliver benefits to all countries party to the agreement.

One thing that is clear is that U.S. taxpayers will pay for the deficiencies of the agreement.  Either U.S. taxpayers will be paying for thousands of Central Americans coming to the U.S. or the money will be spent to try and improve the plight of these people in their home countries.

There are many instances where U.S. trade agreements, once concluded, fail to deliver for all the parties involved because of a lack of honest assessments and due to an inability to recognize the fact that our trading partner is unable to meet its obligations.

The arrival of people at our southern border and the illegal crossing into the U.S. reflects a combination of many shortcomings.  While U.S. government websites may gloss over shortcomings and emphasize the positives by pointing to supporting statistics, the issue of thousands from Central America making their way to the U.S. and attempting to enter illegally will remain in the headlines. Politicians will continue arguing and manipulating the situation for their political ends.  Unfortunately, none of the headline grabbing soundbites will do anything to address the underlying problems.  What is needed is a serious examination into whether the U.S. wants to engage in the hard work necessary to make CAFTA deliver the economic benefits to the people of the countries that signed the agreement.

Ingram’s Transformation of the Publishing World

Oprah Winfrey to be Keynote Speaker at U.S. Book Show

Independence Day and Freedom to . . .

Ingram’s Transformation of the Publishing World