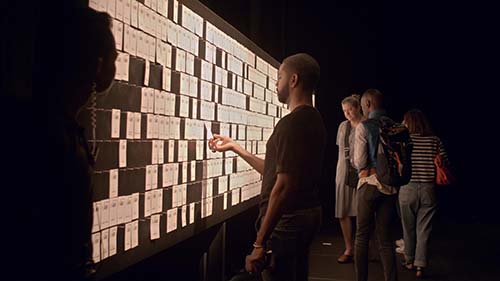 Derek DelGaudio’s In & Of Itself is a film I can’t explain. I believe it is one of the most poignant, emotionally moving, and challenging minutes I have spent. I have watched it three times in its entirety. Each time I go away feeling something inside of me has changed. And it has. I just can’t explain it. I would encourage you to take that journey yourself. Turn your cell phone off and any other distractions. Turn off your inner dialogue and let the film flow to you.

Here is what Hulu says about its original film: “In & Of Itself tells the story of a man fighting to see through the illusion of his own identity, only to discover that identity itself is an illusion. An intimate and powerful exploration of what it means to be and be seen, the film chronicles Derek DelGaudio’s attempt to answer one deceptively simple question, “Who am I?” His personal journey expands to a collective experience that forces us to confront the boundaries of our own identities.”

In one of the opening scenes, members of the audience are looking at a large board with “I Am” cards to pick from. Some are very contemplative, others less so. Some are smiling, others are very serious. But each one has to make a decision before sitting down. Carrying in their hand a slip of paper identifying who they believe they are . . . at least at that moment.

In the background, you hear Derek DelGaudio.

They ask you, “What do you want to be when you grow up?”

Later they ask, “What do you do?” which means “What have you become?”

It is not enough to have a name. They need something to call you. So, you search. You look at the roles the world offers you, trying to find the one that reflects who you are.

Only a lucky few get to play the role they want. The rest settles for what’s left or struggle with what they have been handed. Then we all learn to embrace our illusions of identity.

I did. I thought I knew my role. Then I met a man who told me who I really was.

And I knew he was right. I just didn’t know why.

From that scene in the film and on, I will not spoil the journey for you. As I said, I can’t really explain it. You just have to watch it yourself.

In & Of Itself is a Hulu Original and was a one-of-a-kind theater experience, created by Derek DelGaudio and directed by Frank Oz. The show had its World Premiere at the Geffen Playhouse in Los Angeles on May 3, 2016, where it saw several extensions before moving to the Daryl Roth Theater in New York City. It opened Off-Broadway to critical acclaim and once more quickly extended its initial 10-week engagement, selling out its intimate 150-seat house, night after night. The show continued extending its run, again and again, until DelGaudio decided (somewhat controversially) to end the show at the height of its success, stating, “I feel like I’ve said what I wanted to say.” After 72 weeks, 560 performances, and grossing over $7 million at the box-office, In & Of Itself closed as one of the most successful shows in off-Broadway history.

Yona Goes To the Magic Flute

Oprah Winfrey to be Keynote Speaker at U.S. Book Show