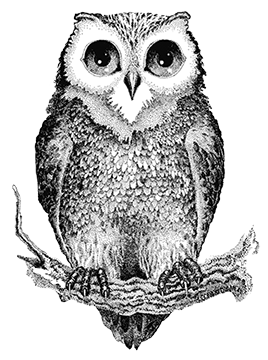 Owls have been known to perch among the branches—and have been accused of watching the world go by. While Truth has it that owls have been long sought out as birds of wisdom, so too does it tell that owls are tremendous observers.

And that the watchers of society need to heed the wisdom inherent in owls. For, although it is granted that owls do indeed see everything, they tend to be pictured as aloof—above the fray. And yet, in a turmoil-boiled world, comfort can be derived from the fact that owls are designated to observe, comment, and inspire.

Maybe, it’s not the owls’ aloofness that bothers watchers. But rather the owls’ ability to transform a moment of silence to a flutter of activity within a once tranquil sea of conformity.

Or maybe, it is the unknown quality behind those pictures of owls that seem to frighten people.

There seems to be a power gathering beneath the owls’ surface which will eventually be released—when the owls cease to be Watchers.